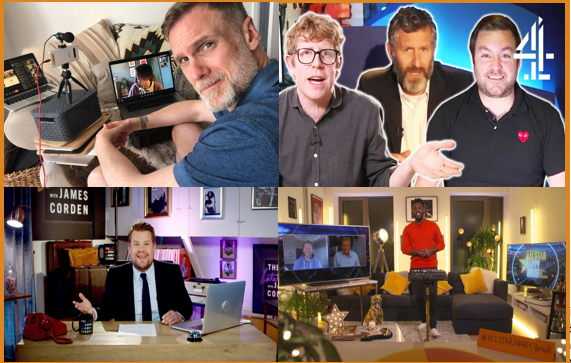 Pandemic Programming Home (Made) Is Where The Heart Is – For Now

As the global pandemic pushes every sector to think out of the box creatively, the UK’s commercial broadcasters have played their part, none more so than the production of new TV content in these tricky times – pandemic programming.

Like with any sector the show must go on, as normal routines have been cast aside, it is up to the broadcasters to provide some sort of comforting normality in the schedule. From breakfast to chat shows, from afternoon quizzes to evening news, then finishing with a soap or drama to end the fifth Monday feeling of the week. Since the beginning of lockdown on 23rd March, we’ve all been glued to our televisions, with individual impacts across the major stations up  year-on-year (March +26%, April +20%, May +8%, June +8%) and broadcasters have had to adapt in order to produce new content.

The viewer like anybody has the desire for new material and in the current circumstances broadcasters are making ends meet. Every broadcaster has utilised homemade content, from Channel 4’s The Last Leg: Locked Down Under which broadcast simultaneously from Melbourne, London and Huddersfield to ITV’s Isolation Stories, four short dramas depicting life in lockdown and what families are going through during isolation. Even our very own Smithy has had to perform his Late, Late Show amongst a backdrop of some fetching décor in his garage on Sky Comedy.

In late May, the UK’s biggest broadcasters agreed guidelines endorsed by the Department of Digital, Culture, Media and Sport to resume filming popular programmes such as Coronation Street, EastEnders, Emmerdale and Top Gear as archive episodes began to run out. This came as a timely response, with the UK being one of the most important film and TV locations in the world with a record £3.6bn spent on making more than 300 movies and high-end TV productions last year (Guardian). Yes broadcasters have saved money in producing this pandemic programming, but has it come at a cost of quality? We may in the future see an amalgamation of cheaper homemade programming (instead of repeats), supplemented by our big production shows. The fact that every broadcaster is in this current position aids the popularity of pandemic programming, but no broadcaster will want to be left behind and still show this user-generated content whilst their rivals brush off their shiny cameras and large production sets.

Television has always provided the element of escapism and fantasy for a viewer, such as Game of Thrones (Sky Atlantic), Tiger King (Netflix) & Derry Girls (C4). The popularity of these lockdown created shows may be down to the fact that everybody is doing it and there is no other alternative. Once our lifestyle becomes more ‘normal’ and restrictions pass, everybody will be dying to meet Lord Sugar’s next Apprentice,  gripped to see who’s the latest to have a soggy bottom in front of Paul and Prue,  and keen to see who is who’s type on paper around the firepit in